Light treatment and its effect on the skin

Light treatment and its effect on the skin: Where is phototherapy used? 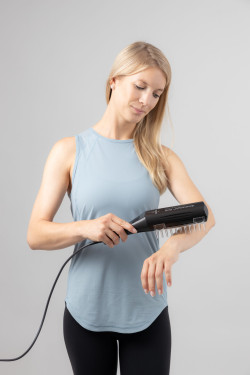 Light therapy has a long history

The fact that sunlight has a beneficial effect in the treatment of skin diseases was discovered by Indian doctors more than 4000 years ago. According to historical sources, patients with vitiligo were treated by rubbing the skin with the ammi majus plant and then exposing them to sunlight. A similar principle of photochemotherapy was also used by doctors in Egypt approximately 2000 years later - however, they did not rub the patients with the plant, but gave them a broth prepared from this plant to drink before exposure to the sun.

However, vitiligo is not the only skin disease that has been subjected to research. Sunlight has also been shown to have a positive effect in the treatment of psoriasis. The biggest advances in this field occurred at the beginning of the 20th century, when artificial sources of UV radiation began to be used in treatment. In the 1970s, the treatment of A-band UV radiation in combination with psoralen began to be used. [1]

Although phototherapy is relatively time-long, compared to local treatment, it has a higher efficiency and is associated with greater comfort related to a quick treatment. Especially if systemic treatment is contraindicated, light therapy has an irreplaceable place. In the form of narrow-spectrum UVB, it is also suitable for children and pregnant women. The tolerability of the treatment is very good and patients perceive it as pleasant and effective. [2]

In dermatology, light treatment is implemented through several methods. They are mainly:

● heliotherapy - treatment with natural light, which is used in the treatment of atopic eczema, psoriasis or acne,
● UVA phototherapy methods using UVA radiation, the positive effects of which are manifested in the treatment of acute atopic dermatology, circumscribed scleroderma, history of granuloma, skin mastocytosis, or cutaneous T-lymphoma,
● UVB therapy - treatment using UVB radiation suitable for the treatment of vitiligo, psoriasis and parapsoriasis, Herald's spot, atopic dermatitis, itching, acne, eczema and other skin diseases,
● combined UVA / UVB therapy - used mainly in atopic dermatitis,
● photochemotherapy - a combination of UV radiation with a photosensitizing substance (most often lysine - PUVA), which is applied globally or locally,
● KUVA treatment - especially suitable for patients with vitiligo,
● other types of phototherapy. [1]

Phototherapy is combined with other types of dermatological treatment - with external and general treatment. A combination with balneotherapy, i.e. spa treatment, is also used. The purpose of such combined treatment is to increase efficiency, i.e. to shorten treatment time and, if possible, to increase safety. [2]

Specifics of light therapy in the treatment of skin diseases

Let's look together at the specifics of phototherapy in the treatment of selected diseases - vitiligo, psoriasis, atopic eczema, acne and jaundice. 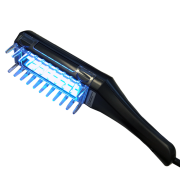 Phototherapy is provided to those vitiligo patients who have not been successful with local treatment. Both UVA and UVB phototherapy are used in the treatment of vitiligo. UVA phototherapy is almost always combined with the photosensitizer psoralen (PUVA). According to research, the use of UVA radiation alone induces repigmentation of more than 60% in half of individuals. With PUVA, the response rate even reaches 78-100% repigmentation of lesions on the head and neck in more than half of the patients. On the contrary, lesions on the limbs are less sensitive to this treatment. Recently, PUVA treatment has been replaced by clinically more effective narrow-band UVB 311 m radiation, in which repigmentation ranges from 41.6 to 100% [3]

Our TIP: In our web shop, we offer a quality handheld UVB lamp Dermalight 80 intended for home use.

Read the summary of treatment in the article: "Phototherapy - treatment with light".

The simplest form of phototherapy in the treatment of psoriasis is exposing the skin to natural sunlight, of course in a controlled amount. Other forms of phototherapy include the use of UVA and UVB radiation, either alone or in combination with medications. A newer type of psoriasis treatment is narrow-band UVB phototherapy, which is more effective than broad-band. In addition, other methods are also used, for example the Goeckerman method (a combination of UVB phototherapy with the use of coal tar) and also the already mentioned PUVA method. Local laser therapy using UVB radiation is used for mild to moderate psoriasis. [4]

Neurodermatitis (atopic eczema, atopic dermatitis) is a chronic inflammatory skin disease that occurs in episodes. It is accompanied by unbearable itching. It often affects the scalp, face and hands. Phototherapy is not only used in the treatment of psoriasis, but it is also very effective for atopic eczema.

Phototherapy is also extremely effective in the treatment of acne, especially when it comes to acne caused by inflammation or bacteria. Light therapy is used to treat mild to moderate acne. In clinical conditions, two types of therapy are used - blue light for acne and red light for acne. Each of them has its specific uses and advantages. [5]

Light therapy is also used in the treatment of neonatal jaundice. It is a condition that causes an excessive amount of bilirubin in the blood and is characterized by a yellow coloring of the child's skin and eyes. Neonatal jaundice is a common condition that occurs in approximately half of newborns and especially premature babies. While mild newborn jaundice disappears naturally within 2-3 weeks, phototherapy is necessary for more severe forms. Newborns are irradiated with a special lamp imitating light that breaks down bilirubin into non-toxic products. [6]

Phototherapy must also be under control

Although we focused more on the benefits of light therapy in the previous lines, just like any other treatment, phototherapy can have side effects. If the treatment is too long or strong, itching, burning and aging processes of the skin appear. Phototherapy can also increase the risk of skin cancer. It is therefore very important that, depending on the different effects of UVA and UVB radiation, the correct form of therapy is selected, the correct dosage is determined and the appropriate interval of application is determined. Under the supervision of a specialist, self-treatment should also be carried out using devices for home use.

There are no more products. More products
Sign up
Privacy preferences
We use cookies to enhance your visit of this website, analyze its performance and collect data about its usage. We may use third-party tools and services to do so and collected data may get transmitted to partners in the EU, USA or other countries. By clicking on 'Accept all cookies' you declare your consent with this processing. You may find detailed information or adjust your preferences below.

Show details
Our webpage stores data on your device (cookies and browser's storages) to identify your session and achieve basic platform functionality, browsing experience and security.
We may store data on your device (cookies and browser's storages) to deliver non-essential functions that improve your browsing experience, store some of your preferences without having an user account or without being logged-in, use third party scripts and/or sources, widgets etc.
Use of analytic tools enables us to better understand needs of our visitors and how they use our site. We may use first or third party tools to track or record your browsing of our website, to analyze tools or components you have interacted with or used, record conversion events and similar.
We may use cookies and third party tools to enhance products' and/or services' offer of ourselves or those of our partners, its relevancy to you, based on products or pages you have visited on this site or on other websites.
Close
This site is protected by reCAPTCHA and the Google Privacy Policy and Terms of Service apply.
Sign up
Product has been added to the cart
Continue shopping Order